The main challenge for any oncologist is to predict the outcome of any chosen treatment for a cancer patient. For any given tumour type there are alternative treatments ranging from watchful waiting to conservative surgery removing the tumour, and finally to extensive treatment with radical surgery, radiation, hormones and/or chemotherapy. In most cases, there are few or none existing reliable methods for predicting the outcome for a single patient.

Epidemiologically and statistically, the probability of 5 year survival for treated cancer patients is estimated based on clinical staging, where survival is ranging from 60-95% in stage I to 0-15% in stage IV. With few exceptions, there is no method to predict if a single patient belongs to the non-surviving or surviving (good prognosis) group within each clinical stage. A good prediction (a good prognostic marker) should allow the oncologist to choose the optimal treatment (or no treatment) for each single patient, and hence either cure the patient with reduced long term complications and side effects, or improving life quality for those who can not be cured, as well as reduce the overall financial costs of treatment.

Markers in our research

Institute for Cancer genetics and Informatics basically studies large scale genomic instability as a possible prognostic marker in a variety of cancers with use of our own methods of Nucleotyping and DNA Ploidy, as well as using established methods like karyotyping, CGH, PCR, IHC and sofort. This is based on the concept of genome instability in cancer which is in line with today’s understanding and theories of cancer development.

The term is used for relative measures of the amount of DNA Ploidy is a cytogenetic term used to describe the number of chromosome sets, or deviation from the normal number of chromosomes in a cell. In cytometry, the expression DNA ploidy is used either to describe the DNA content in a cell or the total DNA distribution in a cell population. Normal somatic cells contains 46 (2 × 23) chromosomes, and are called diploid (2n). The corresponding amount of DNA measured with cytometry is named DNA diploid (2c). Tetraploid cells have 2 times the diploid number of chromosomes and are named tetraploid (4n), and the corresponding DNA amount is classified as DNA tetraploid (4c). Cells with a chromosome number that is exact multiple of the normal diploid number (4n, 8n, 16n) is also called euploid, and cells with either fewer or more than the normal (or multiple) number of chromosomes is defines as aneuploid. The corresponding classification in cytomtry is DNA aneuploid, and aneuploidy is an abnormal situation reflecting an ongoing or previous genetic instability. 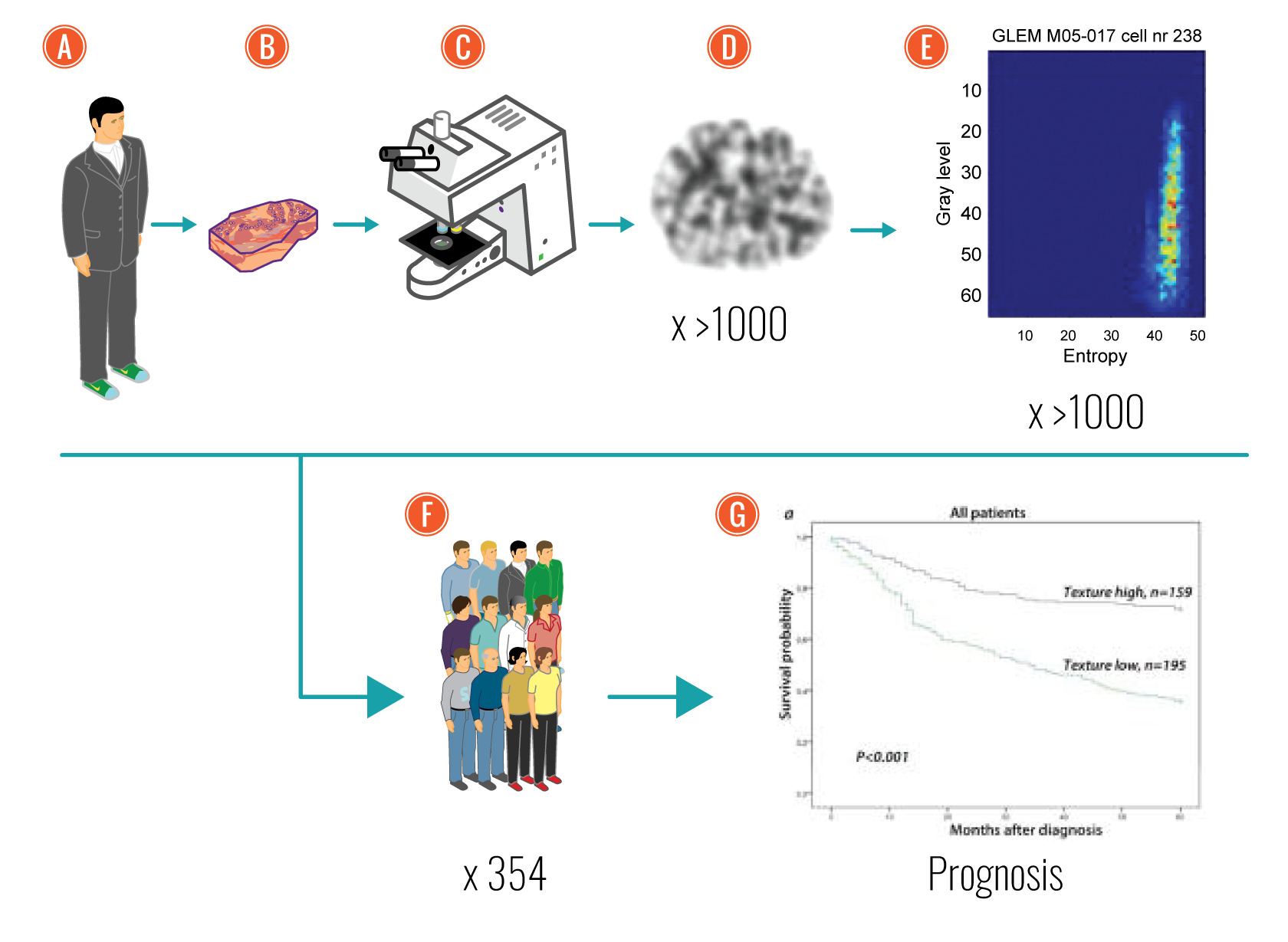 Nucleotyping, prostate patientsNucleotyping: The tumor of a patient is surgically removed (A), divided into tumor block samples (B), stained with Feulgen-Schiff and imaged by a microscope (C), resulting in more than 1000 images of cell nuclei (D). For each nucleus, we compute the desired texture characteristics (E). The texture patterns of patients with good and poor outcome are automatically compared, here in a cohort of 354 patients with uterine sarcoma (F), giving a classifier of high prognostic value (G).

We have coined the term Nucleotyping for our method of classifying a tumor based on qualitative and quantitative analyses of DNA and chromatin structure in the tumor’s cell nuclei with the help of advanced high-resolution digital image analysis. Whereas DNA ploidy only assess the amount of DNA in each single nuclei in a tumour, Nucleotyping also assess the organization of DNA and chromatin in these nuclei. Specifically, we are asessing to what extent the nuclei seem to have a stable chromatin structure, and measures the changes or differences in this structure between nuclei from normal cells, benign cells and malignant cells, and in particular between nuclei in tumours from patients with good vs poor clinical outcome.

In simple words, the basic concept is that tumours with abnormal DNA content and/or unstable chromatin structure is in a more advanced stage and is more likely to have micro metastases (spreading of the cancer). This “large scale genomic instability” can be measured on samples from routine biopsy specimens by computerized analysis of images from the microscope.

The methods have been developed through retrospective studies of cancer patients where the final outcome after treatment is known. Hence, a combination of features describing the DNA- and chromatin status at the time of diagnosis have been identified, and later independently tested for their ability to predict the patient’s outcome

Cancers we focus on